Historically, I’ve never been a huge fan of the WordPress Dashboard.  Not because I don’t think it’s a good idea, but mostly because I don’t use it.  Before I turned this into a WordPress / PHP development blog, I posted infrequently and never saw the point of having a dashboard view.  Now that I have traffic, and hope to get more (*crosses fingers*), I’m spending a lot of time there.  Since I’m spending so much time on the dashboard, I thought I might make a bit more useful with a widget.

Note:  The full (working) version of this Dashboard Widget is available here.

The first step in this tutorial is deciding what to create.  I’m personally a HUGE fan of Reddit, but often enough I’m unable to read it because I’m busy managing this blog.  So, why not bring Reddit to me?  This tutorial will show you every step of how to create a WordPress Dashboard Widget that displays Reddit’s RSS feed.

As most readers here know, WordPress is well on it’s way to being a full-fledged CMS.  As with any good CMS, extending any part should be easy.  It’s no different with the WordPress Dashboard.  Using the wp_add_dashboard_widget function, you can hook into the WordPress Dashboard and drop in your own widgets.  But first, we must write the widget itself.

Most of the above code is pretty easy to follow.  But here’s  breakdown of what happens if you’re a bit confused.

Step 3:  Add The Widget To The Dashboard

In this step, you need to call wp_add_dashboard_widget from a function.

The fourth and final step to creating a WordPress Dashboard Widget is to use the add_action function to add it to the setup.

Once you have everything written, save it all in a file called reddit_dashboard_widget.php.  From there, zip it up and upload it to your WordPress install as a plugin.  Once activated, you’ll have Reddit’s RSS feed as a Dashboard Widget.  It will show up towards the bottom, so you’ll need to re-order it to your liking.

As I brought together this dashboard widget as a proof of concept, I got to thinking about how it could be improved.  One way would be to use more Ajax to fetch the updated feed.  Or if the RSS feed doesn’t update frequently enough, we could scrape the page ever n minutes to get updated content.  Also, at the suggestion of a reader, I’m going to start including full (working) examples with each tutorial.  Enjoy!

One neat feature of WordPress plugins is shortcode.  Shortcode enables a user to put something like “[myplugin]” in their posts or pages and have it display content from their plugin.  Making WordPress shortcode work for you isn’t terribly difficult, but without some help it can be confusing.  In this tutorial, I’ll show you how to use shortcode in your plugins. 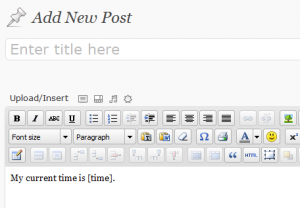 Let’s say you want to print out the current time anywhere in your post where you put “[time]”.  Easy enough!  Open up your theme’s functions.php and enter the following.

So now, “[time]” will be replaced with the current server time formatted like hour:minute AM/PM.  But what if you aren’t sure what format you want the time to come out in?  Well, you just need to add an attribute.  I’m going to be using PHP’s date() function formatting in this example.

What the above code does is add the possibility of an attribute to your shortcode.  So you could use it like “[time timeFormat=’d.m.Y’]”, which return today’s date.  In the extract function, you can specify the default value (which I set as hour:minute AM/PM).  You can add as many attributes as you need to your shortcode.

While the release of WordPress 3.1 is still a few months away, a lot of people have begun to wonder what new features might be added and what bugs may be fixed.  The WordPress developers have finally held a meeting and came up with a plan of what they would like to include in the 3.1 release.

So you’ve created an epic contact form plugin for your WordPress install.  It seems secure enough.  You’re validating input, checking input types, and doing everything else right.  After it’s been up for a few weeks, you take a look at your database and notice you’ve got a bunch of crap in there.  “How could this happen?!” you scream!

Well, it probably had something to do with a Cross Site Request Forgery (CSRF).  Cross site request forgeries happen when someone starts submitting information to your form’s processing controller from another domain.  This is easy enough to do, because you can set the action field of a form to anything you want.  If you aren’t careful how you process your form, CSRF attacks can be a huge problem.   So how can you secure your plugin against CSRF attacks?  By using a nonce (Number used once).

Nonces are unique identifiers that you can use to make sure your form is coming from the right place.  To use them, you follow three simple steps.

And then in your controller/processor…

That’s really all there is to it.  In literally 4 lines of code, you can make your plugin that much more secure.  On a side note, if you are using ajax to submit a form or pull data, you can pass the nonce through as a form field (or as part of the query string), but you’ll need you use a different function to verify it (check_ajax_referer).

In all WordPress versions, there has been a severe dichotomy between text editors.  In one corner we have TinyMCE, which is a full-featured editor that is used when constructing pages and posts.  On the other hand we have what amounts to a text area, where you make changes to code in theme files.  I’ve always wondered why there isn’t some sort of syntax highlighting, tab support, or rudimentary auto-completion available in the default code editor.  As a developer, I realize how hard these features are to implement using nothing more than CSS and Javascript, but I thought some attempt may have been made by the core developers by version 3.

That has yet to materialize, but the community has come to the rescue.  A plugin called Power Code Editor exists that does simple syntax highlighting and improves font that is used in the editor.  After applying the plugin, your code editor will look like this.

If you’re interested, you can download the plugin here.  Or, from within the WordPress plugin installation menu search for “power code editor“.

Sometimes a plugin developer might want to submit a form back to itself.  Or perhaps they want to link back to the current page, except with a variable in the query string.  Often enough, you’ll seem them do it this way.

<a href='<?=$_SERVER['REQUEST_URI']?>'>Click Here</a>{/code} The problem with this code is that it's easily exploitable.  Remember, the behavior for REQUEST_URI and PHP_SELF are to take whatever the entrance URL was and return it to the caller.  So how can this effect your pages?  Since the user can append anything that they'd like to the initial entrance URL, it becomes the vector for attack. So how can you submit forms and links back to themselves without these variables?  For forms, just leave the action blank or don't include it at all. <pre lang="html4strict"><form method=POST>

And for links, using the # sign will link back to your current page.

If a plugin developer absolutely MUST use server variables, just make sure to escape them accordingly.   Use the WordPress function esc_url().

In reality, it’s bad practice to use the PHP $_SERVER variables at all.  So try to avoid doing it at all costs.

By default, WordPress 3 ships with 6 (5 in your aren’t using MU features) roles that can be assigned to individual users.  Unless you’re browsing the codex or have been using WordPress for ages, it’s sometimes hard to understand the differences between user roles.  Many bloggers run their site on their own, so roles really don’t matter all that much.  However, for those who run sites with multiple contributing users, roles help keep the order.

If these roles aren’t enough to suit your needs (perhaps you need finer-grain permissions), there are plugins that exist in the WordPress Plugin Repository that can help.

Prior to WordPress 3, if you wanted custom menus you had to code them yourself.  This generally involved editing your theme’s header.php file, knowledge of HTML, CSS, PHP, and probably SQL too.  Unsuprisingly, easy custom menus was a highly requested feature for WordPress 3 and it was delivered.

Unfortunately, most themes don’t have support for custom menus yet.  Wordpress makes it easy to add them as widgets, but if you want real menus, they need to be enabled in your theme.

The first thing that you need to do in order to get custom menus working in WordPress 3 is enable them.  To do that, open up your theme’s functions.php file, and drop in the following code.

Once you have done that, go to Appearance -> Menus and you should see something like this.

Step 2:  Add the Menu to Your Theme

Assuming that you’ve created a custom menu and want to display it, you’ll need to add the display function to your theme.  In most cases, you’ll need to open up the header.php file, and the area that looks like a menu.  This changes for every theme, but it should be fairly obvious.  Once you find it, insert the following code.

After that, you’re menu should display in your navigation bar.  Good luck!