In my previous article, I talked about how to set up a rudimentary custom post type in WordPress 3.  This time, I’m going walk you through adding your own custom meta boxes to the admin interface. 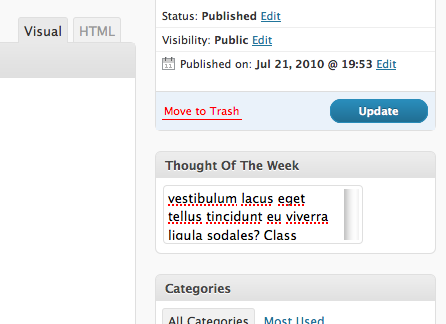 Out of the entire tutorial, this is probably the easiest part.  We’re going to add a little side-column box for “Thought of the Week”.

The next step is to create your display function.  Here’s mine.

First, you need to declare the “$post” global variable.  This will give you access to a bunch of information, most important of which is the post ID.  In the second line, I get any saved meta information with the name “thought_of_the_week” (more on this later).  In the last line, I simply echo out a text area with the content from “get_post_meta”.

This step is easy as well.  Here you will register a save action with your custom post type.  All that means is that when you click the “Publish” or “Save Draft” button, this function will be called.

Step 4:  Save the Details (update_post_meta)

The final step in creating a custom metabox in WordPress 3 is using the “update_post_meta”.

Here’s a quick breakdown of this function.

The first argument in update_post_meta is the post ID.  The second is the name of the meta box.  The third is the data you wish to save.

That’s all there is to it.  Once you’ve done that, you can fetch the data anytime that you like by calling

Really nicely written little tut. So far I’ve scoured loads pf tutorials in creating meta boxes and no-one explained each step with such simple clarity. I think most tuts are written for those who already know what each function and terms means so this one is great for the newbie.

Only thing which would have helped hugely is to see it all together as it would be inserted in functions.php just to be sure we’re adding it in the correct manner.

Thanks for this helpful tut

Thanks for the feedback. I’ve taken your advice and have started to include full working examples where relevant.

[…] Step By Step tutorial on Setting up Meta Boxes(Write Panels) […]

That’s great, but it would help if it was mentioned into which files the new functionality would be added.

The code goes into your base plugin file. So the calls to add_meta_box and add_action go there, and then the functions they might call can go anywhere, so long as they are included before those two calls.

I’m trying to follow this tutorial, should all this code go into functions.php ?
I’ve not developed with wordpress before this really only made my own basic themes.

Would it be possible for you to upload your example with correct file structure, so i can see exactly how it is made?

Thanks for the first part of the tutorial also, much more informative than others!

When my sesion close data will be lost ???

How can i “fetch the data anytime”, looks like the code for that is missing.
Sorry, im new to this.

Really great tut! Really helped me get into this whole thing with metaboxes! =)