The Ruby on Rails community has long been a proponent of Behavior Driven Development(BDD) and has a great ecosystem around it supporting that testing methodology. From Cucumber to Capybara, RoR developers have it made when it comes to BDD. But what about Django? What about Python? Django and Python don’t have access to Cucumber or Capybara, but what we do have is a fantastic port of Cucumber called Lettuce.

What is Behavior Driven Development

Before we can get started talking about Lettuce and all the cool things you can do with it, we first need to talk about BDD.

Behavior-driven development combines the general techniques and principles of TDD with ideas from domain-driven design and object-oriented analysis and design to provide software developers and business analysts with shared tools and a shared process to collaborate on software development. (Wikipedia)

BDD arose out of the need for the business side of software and the engineering side of software to communicate more effectively. Prior to BDD, it was a lot more difficult to communicate the business requirements of a project to developers. Sure there were spec documents, but those still needed to be translated into a language the computer can understand. With BDD, tests and acceptance criteria are more accessible to everybody involved. Dan North suggested a few guidelines for BDD, and then the development community took it from there.

Feature: Authentication In order to protect private information As a registered user I want to log in to the admin portal Scenario: I enter my password correctly Given the user "Jack" exists with password "password" And I am at "/login/" When I fill in "Login" with "Jack" And I fill in "Password" with "password" And I press "Login" Then I should be at "/portal/" And I should see "Welcome to the admin portal"

So now that we know the gist of BDD, why would you want to use it? There are probably more reasons than the 3 I’m going to list, but I found these to justify my use of BDD in most cases.

Alright, now we’re done with the background information. Let’s get rolling on some testing.

To follow the rest of this article, you’re going to need the following:

On the bright side, no previous testing experience required!

The best place to start with all this getting the virtual environment set up.

After that, lets get Django installed.

And now we’ll need to create a new Django project.

At this point, I also like to CHMOD manage.py so I can execute it without calling Python directly.

If you can run the server and see the image below, then we can proceed.

Now that we have Django set up, lets go ahead and create the app we’ll be testing in.

And then go ahead and add the blog app to INSTALLED_APPS in your settings.py file.

Also, lets configure our project to use SQLite3.

Now that we have a Django project and one app set up, its time to take a break and talk about Lettuce.

No, not the vegetable you add to salads. I’m talking about the the BDD testing framework for Python (http://www.lettuce.it). Lettuce is basically a port of a BDD testing framework from the RoR community called Cucumber. The Lettuce website contains extensive documentation and is a great source for learning best practices with it. It’s worth noting however, that at the time of this writing the Lettuce website is undergoing some design changes. They’re incomplete and have made it pretty hard to extract information from the site. Hopefully by the time you need it for reference it’s back to being usable again.

Alright, back to work. Lets install Lettuce, Selenium, and Nose and then freeze a requirements file so we can replicate this environment if we ever need to.

You’ll also need to add Lettuce to INSTALLED_APPS in your settings.py file.

So now that you have Lettuce installed, lets see that it actually works.

Great, Lettuce worked! It didn’t find any tests to run, but thats ok. At least we’ve verified that we installed everything correctly.

Before you can test anything, you should probably have some content to test on. So let’s quickly wire up a simple view in the blog app.

Feature: Test As someone new to testing So I can learn behavior driven development I want to write some scenarios Scenario: I can view the test page Given I am at "/quick-test/" Then I should see "Hello testing world!"

Look at all that plain english! Even without me telling you anything, you can probably figure out what we’re trying to test. But let me break it down for you.

Alright, so now that you have your first test written, run it using “./manage.py harvest”. You should see the following: 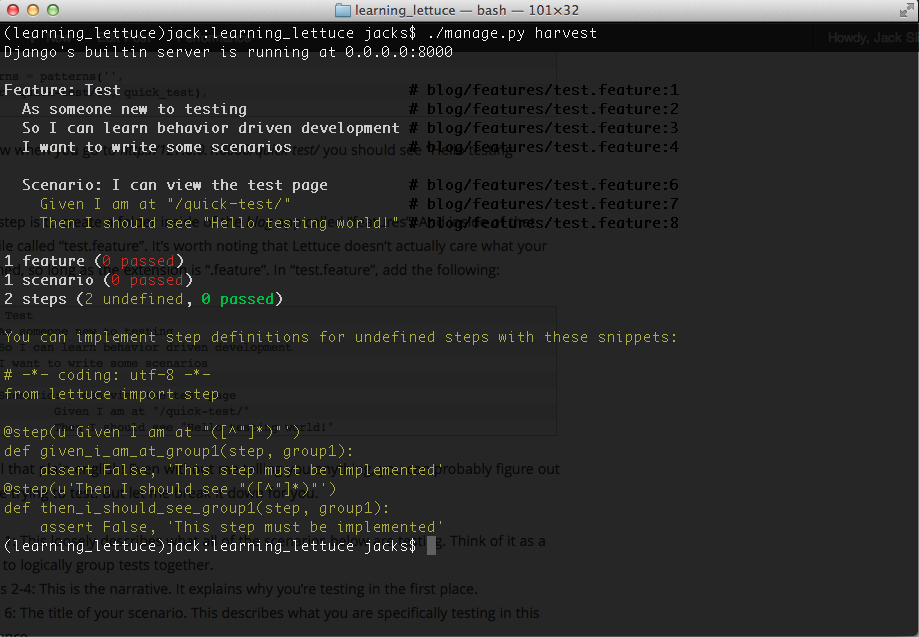 Look at all that beautiful output! But what does it all mean?! It’s telling you that Lettuce attempted to run one scenario, and that the two steps within that scenario aren’t implemented yet (remember, each step maps to a method in your code). And because Lettuce is great, it gives you some code to help you implement those two steps.

In your settings.py file, you’re going to need some additions too.

We use the Nose test runner because it’s faster than Django’s default test runner, and we change the server port for running tests so it doesn’t collide with our development server. At this point if you run `./manage.py harvest` again, you’ll still get notices for unimplemented steps, but you’ll also see Firefox open and close real quick. That means we’ve done our job correctly.

Alright, lets make something happen. If you look at the output from the harvest command, you’ll see that it gave you some code to help you implement the new steps that you wrote. Go ahead and copy that code into the bottom of the terrain.py file (and make sure to import ‘step’ at the top). Now, re-run ./manage.py harvest. You should get the following output.

So why did our steps fail? If you look that the code that was generated for you, there is a line that essentially says “False is equal to some string”. This is obviously not true, so our step fails. So why don’t we make the test pass? We’re going to change a few things:

Now if you run ./manage.py harvest command again your tests will still fail, but this time for a different reason. The reason is the url that we’re passing into the step definition isn’t well formed. We were hoping to be able to pass relative urls in, but we can’t. So go ahead and modify the step in your scenario to look like this.

To make the next step pass, we need to make our web page a bit more formal. Go ahead and create a folder called “templates” inside of the “blog” app. Inside that folder, add a file called “base.html” and populate it with:

Now create a file called “blog.html” inside the same folder. Give it the following content:

And you’ll need to update your settings file.

Now that our template is more formalized, lets update the step definition in “terrain.py”.

This code explains itself pretty easily. We check to see if the content that is passed in via the step exists inside the body of the page. This has a few drawbacks:

Since this is a simple example, we’re going to ignore these issues for now and just run our tests.

Now that you have passing steps, you’re well on your way to writing serious integration tests for your code. But there is still a lot more to learn. The next article in this series will cover using Lettuce Webdriver to handle common step definitions, tables, scenario outlines, and much much more.

All code related to this post can be found at https://github.com/vital101/Learning-Lettuce

4 replies on “Integration Testing With Django and Lettuce: Getting Started”

Take a look at my homepage; australian education

Can you get this working in eclipse?

This article is no longer applicable to Django 1.6 or later.
For example DjangoTestSuiteRunner has been obsolete since 1.5 and replaced by DiscoverRunner.
The code in terrian.py doesn’t work at all even if you tried to simply replace the old test runner class with the new one